Last week, Bob Cordery issued his draft of Big Board Portable Wargame:Modern.  Using an 8x12 square grid board, it is possible to fight very enjoyable mobile actions, from the late nineteenth century to the present day.  I tried out the new rules on a World War One trench layout....

WE INTERRUPT THIS BLOGGING FOR A SPECIAL ANNOUNCEMENT. MARS HAS INVADED BRITAIN....

Here we see soldiers of the  Territorials as they set up their maxim gun to stop the invading tripods. 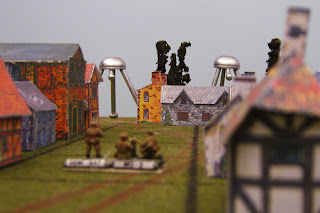 Yeomanry peer through the morning mist, awaiting the signal to charge. 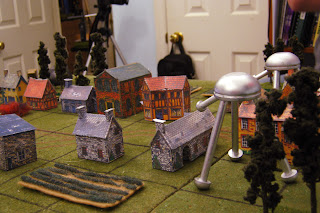 Suddenly, the one of the walkers launched a deadly black gas shell at one of the artillery positions. 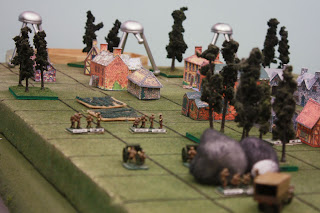 It then seared the survivors with a deadly heat ray. Panic began to take hold. 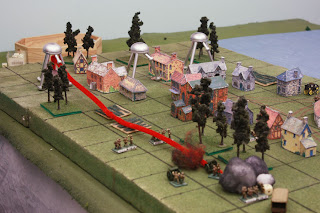 Bravely the rest of the battery stuck to their guns, returning fire. 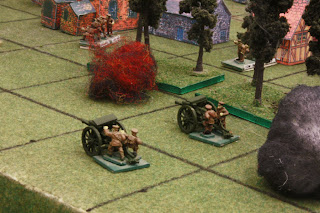 The unstoppable tripods turned the heat ray upon the local Methodist Church, as infantry tried to move in for an assault. 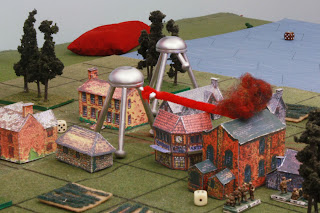 At short range the heat ray did horrible damage. 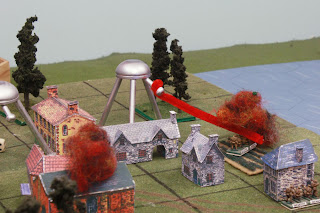 Here it wipes out a platoon of Territorials. Still they have bought time for the artillery to land several shells, slowing down the monsters. 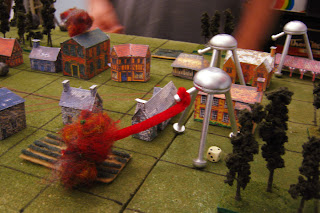 The church collapses from the flames. Can anything stop the attack? More infantry moves up to attack the walkers. 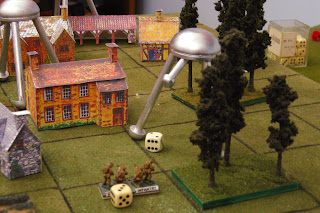 Finally, a combination of artillery and close assaults takes one of the constructs down. 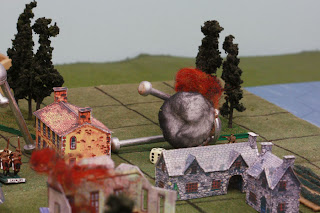 The British soldiers, however have taken such losses that they must retreat. Hopefully, they have bought enough time for refugees to take to sea to escape the onslaught. To find out,  follow the conclusion of our story in "Old Admirals"

The figures are all from Peter Pig.
The buildings are downloaded card models from Fiddler's Green. They are in the English Village collection, printed at N-scale.
The tripods are all built from wooden elements found at Hobby Lobby, and given a coat of chrome paint.

My friend, Ben ran the Martians. Burning down a building was the highlight of the game for him.

Spike, as usual did all of the photography.

The rules worked well for this exercise. We used the "Tank" profile for the Martains, except that the gun was considered "heavy artillery" at range over three, and a "machine gun" at range of three or less; and the walker could also fire a "black cloud" every artillery phase. Fires lasted in the square hit for two turns, forcing units to move out or take damage. Martians were "elite", British "average".

The game took less than an hour, with Ben new to the system, and Spike taking a lot of pictures.