Tonight I played two battles featuring the 2nd US Armored Division versus a German kampfgrupe featuring two Tiger tanks. For the first game, I used the modified M3 Medium from my previous Tunisian battle. Finding it to be too effective, I changed the rating as such:

M3 Medium: Tank, SP-3, Move-3, Armed as a light tank(range 3) AND a tank(range4). If it moves, it may fire with either gun. If it DOES NOT move, it may fire BOTH. Because of its high profile and doors in the side armor, it subtracts 1 from any Resolving Hit rolls. 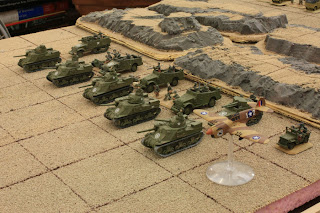 The still green American forces. They are rated poor. Five M3 mediums, a SP 105 medium howitzer, a SP AT gun, three scout cars(counting as half tracks) carrying a mortar, an AT gun, and an infantry anti tank team. There is also a jeep carrying a spotter team. Flying overhead is a P40 fighter plane. 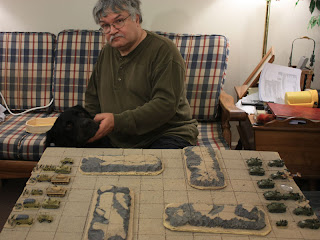 My noble dog, "Boye" had to get in a picture. The starting terrain channelizes movement. 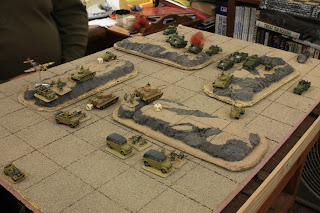 The German used long range fire from their tTigers to knock out some  US tanks early.  The American medium gun started to hammer the Tigers, while the fighter plane disrupted the movement of the German support troops. 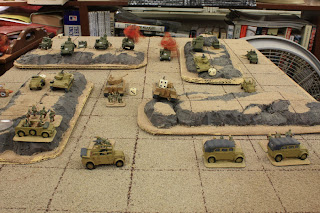 Things get very intense at the pass. Still, the Americans get good service from their artillery. The spotter on the hill does fine work. The German command team takes great risks to point the two Tigers onto targets. 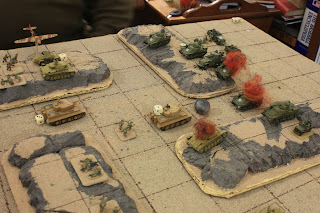 One of the supporting MkIII's brews up, and the Americans move there SP anti tank gun to fill a gap in the line.  The P40 continues to harass the German left flank. 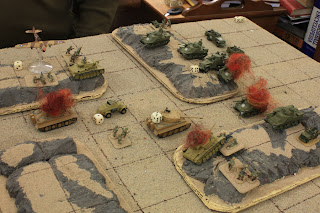 The AT gun takes one Tiger  Unit out. The remaining German armor pours fire into the M3 holding the right hill, to no avail. 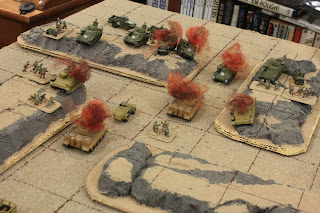 Just a s the German armored car destroys the AT gun, the second Tiger is hit by flanking fire from an M3.  Both sides hit the critical point on the same turn. It is another hard fought draw. 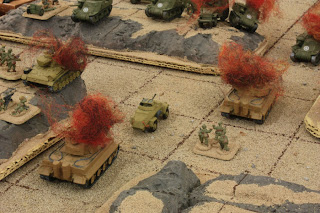 A FEW NOTES: I was much happier with the second version of the M3. My earlier attempt, allowing the hull gun to fire in the artillery phase, often wrecked a German turn before initiative was rolled. In this version, there were only a few turns where the M3 got to fire both guns, and the tanks were very vulnerable to enemy fire.

The Tigers were tough, but not at all unstoppable.

Again, air power played a very dramatic roll. The strafing fighter, and the US SP 105 Unit, kept the Americans in the game most of the way. If you haven't tried the Air Rules, do so. You will enjoy the results.

All modes are from Battlefront, except the Tigers, which are by Old Glory.

Next Week:  Some Early Action in the Western Desert.
-Steve
Posted by Steven Page at 8:25 PM