I played out the battle at Kasserine Pass tonight. Here are the forces involved: 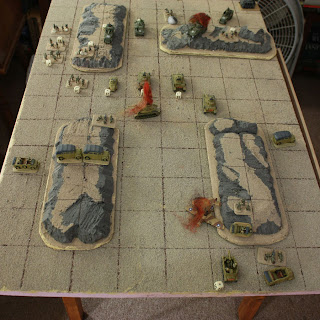 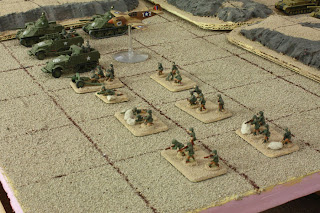 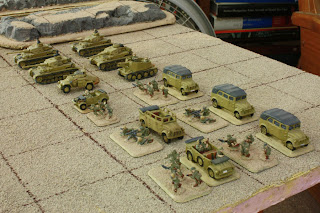 Special rules-To reflect the unique qualities of the M3 Lee Medium Tank, I gave it some special abilities, both good and bad.
1) It can fire its hull gun in the Artillery Phase, as an anti-tank gun(range 4).
2) It can then, in the US player's phase, EITHER move, OR fire its turret gun as a "light tank gun"(range 3).
3) Because it had a high profile, and side doors weakening its armor, ANY hits on the M3
are rolled on the Hit Results table with a -1 modifier. (There is a reason the Soviets called my favorite tank the "grave for seven brothers"). 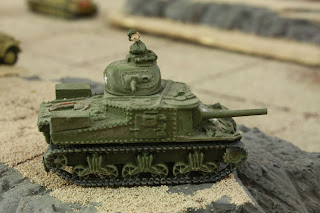 This was my first game using the Aircraft Rules for BBPW, and I truly enjoyed them. The American P40 went after the German trucks before they could unload, but without success. The German's had to unload their machine guns close to the Command and SP artillery Units to keep the strafing plane at bay.

The Americans used their SP artillery, and their two anti-tank guns to keep the four panzers from supporting the German infantry assaults. The M3s had some early success against the German armor, but soon found the awkward layout of the tank to be a detriment (The Germans engaged the M3s at a range of four, and if they drove them back, the Americans could not fire in their phase, after having fired as artillery, then moved up into light tank range.).

The Germans managed to shoot down the P40 as it homed in for a damaging attack on the German "Bison" SPG. 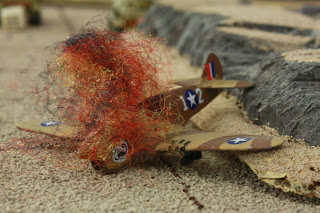 The Germans finally launched a series of assaults down the American ridge line, knocking out several tanks and smaller units. however, when the dust cleared, both sides had reached their breaking point. The battle that looked so promising for the German's, early on, was an expensive stalemate.

GAME NOTES: Aircraft add a lot of flavor to the game. I plan to try out Stukas and recon planes very soon. Aircraft WILL get your enemy out of his transport, one or two stops ahead of his schedule!

Initiative rolls can certainly be good for representing command SNAFUs. The Americans, with all their artillery firing without the need for initiative points, STILL had a turn in which they had only four Initiative points, and six Units, including the fighter plane, needing them.

The M3 could have been left as a regular tank, and the results would probably have been the same. One of the joys of PW is the ability to tweak a Unit or two for a particular game, without throwing the whole thing out of balance.  I plan to continue playing a short campaign in Tunisia, and plan to give the Germans one Tiger in most games. It will have 4SP, and a range of 5 squares. I'll let you know how it works out next time!
-Steve
Posted by Steven Page at 8:53 PM