As I have said many times, my parents were both very supportive of my wargaming hobby from the beginning. Here is a picture from 1961 of me opening one of the most important gifts of my life, the Marx "Blue and Gray" set, on Christmas morning. 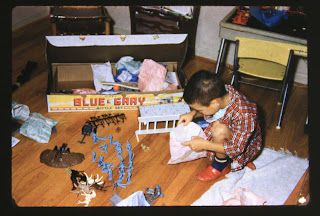 This wonderful set of figures included EVERYTHING! There were infantry, artillery, cavalry, medical personnel, all types of small accessories, and scenery, including buildings, bunkers, trees and a model of Burnside's Bridge.  The lesson was clear to me. Toy soldiers should occupy a diorama. I still spend almost as much time of scenery as I do on figures.

I still have about twenty of the stalwart 54mm figures in my collection. They are painted and based, and will make an appearance this summer when I run an outdoor Not Quite Portable Wargame of the Civil War. (More on that later).

Over the years, Christmas usually meant a new period or theme for my gaming.The D-day landings, also in 54mm: Charge of the Bengal Lancers, in 25mm, hand-painted plastics; Fort Apache, also in Marx painted 25's; a wrapped box filled with ROCO mintanks that got more attention than a new bicycle. When I discovered board war games, my parents made sure there was one new one each year.

Even in my forties, Christmas would see me opening an envelope, with a check and a note saying"Go get something at Sword of the Phoenix" or the War Room, two now departed meccas for the hobby.

My parents have both passed on, now, but I look back on a lifetime of love and support of a hobby that has so deeply shaped and enriched my life.  I know that they would be very happy to see the friendships that have grown out of  a gift that had a small lad spreading out his armies on Christmas morning.

Merry Christmas, to all my friends!
-Steve