Having truly enjoyed my last 1941 Desert game, I decided to run another , this time featuring two predominately tank forces. For the British, all rated "average": 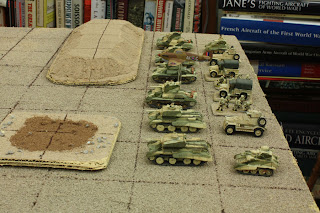 For the Italians, also rated "average": 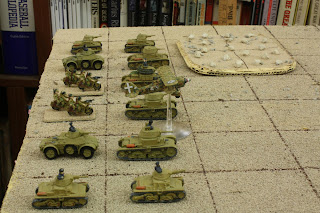 The terrain featured  a low rise on the British right flank, a salt marsh or the British left, and a rocky patch in the Italian zone. the salt marsh was played in this manner: If you move into, or start a turn in the salt marsh, roll a Hit Result, On a roll that does damage, you are stuck, and your move over. If you started the turn stuck, and roll a hit. you take on damage point to your unit strength. Signify a stuck unit by placing it DIAGONALLY in the square. Any "stuck Unit" in Close Combat is considered Flanked. 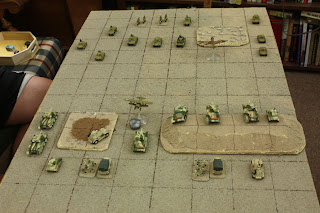 young Tori took more interest in the game tonight, helping me find any dice that left the table. 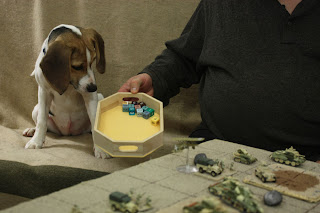 The British "stuck" an armored car in the marsh early. The Italians put some pressure on the British left. hits were traded quickly. 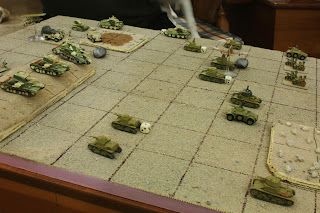 Having dropped her bombs, the Hurricane tried to shoot down the Falco. 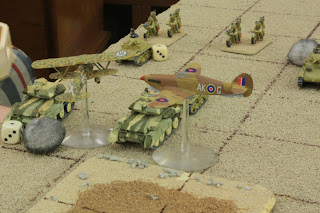 Action grew intense around the salt marsh. The armored car got  out, only to be followed by an A13.  The other A13 was destroyed by a pair of heroic Motorcycle Units launching close assaults. A Vicker's light tank closes with one of the motorcycles, and lays in a withering burst of fire. Most of the italian vehicles on the right flank have taken hits. 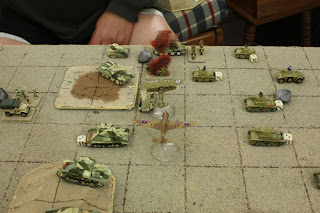 The Falco escapes the guns of the hurricane, and gets in one more strafing run against the Motor rifles. Tank units from both sides burn in the background. The mA13 is still "stuck", and taking damage. 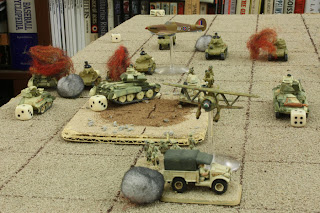 The Italians have had enough, and begin to cautiously fall back. The British begin to "tidy" their left flank. Both fighter-bombers have expended their fuel, as well as their bombs. 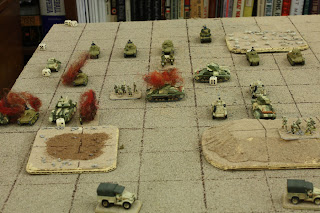 The British right begins to push forward, rolling back the Italian light armor. With several undamaged Units, the British are in a good position to exploit their victory! GAME NOTES: With no Anti Aircraft or Machine-gun Units,  the fighter bombers had some good chances against the "poor bloody ground-pounders" on both sides. By the time the bombs were dropped, both planes were out of fuel(6 turn limit) and had to peel off. Again, aircraft are fun to use!

The marsh was just UGLY! I think I will use the same mechanics for wetlands in Holland when a game Market Garden,  or in the Reichwald.